skip to main | skip to sidebar

Having never read New Genre before, I wasn’t sure what to expect when I got issue #4 in the mail. It’s a slick digest-sized mag, perfect bound with a disturbingly simple cover. When I first saw the cover art, it made me want a popsicle. Then I realized it was rows of teeth. I wasn’t hungry any more.

It’s a heavy issue, weighing in at 145 pages, but what separates it from a lot of other speculative magazines is that it only contains four stories. Each author gets plenty of space to tell their tale. If you like longer stories, that’s a plus. The font is large enough to read comfortably and the magazine is laid out very well, with nothing crammed together and plenty of room on the page.

The issue leads off with a pair of essays, one by each editor. Adam Golaski writes a response to Douglas Winter’s essay, "The Pathos of Genre." This essay was adapted from a speech Mr. Winter gave at the 1998 Stoker Awards Banquet, and it can be found online here. Mr. Golaski’s essay refutes many of the points made in "The Pathos of Genre," and he does a good job of supporting his arguments. All in all, an interesting, informative essay, with a good concluding paragraph.

The second essay is by Jeff Paris. It expands a little on the first essay, but applies the ideas more toward science fiction than horror. Both essays discuss speculative fiction and the concept of genre, and I think they provide a good introduction to the four stories that follow, all of which are hard to nail down to a specific genre.

The first story, "Bink is Luv," is a futuristic computer-dialogue tale about a lost girl, her father, and her childhood idol. The entire story is told as an online chatroom conversation, which I would imagine is hard to write, but Jan Wildt pulls it off very cleanly. The dialogue is a little awkward to follow at first, until you get used to the chatroom feel and lack of punctuation, but it is well-paced and fun to read. The story raises some interesting social questions and lets the reader decide the answer.

Paul A. Gilster contributes the second story, "Three Views from Deir el-Medina." It is also a futuristic tale, though this one could be set maybe 10 or 20 years from the present day. The story is rich with detail and strong dialogue, easy to read and follow. The main character, an engineer designing an unmanned space probe, is likeable and interesting, and I enjoyed this story right up until the end. I felt let down by the ending, mainly because it didn’t provide any closure. (Or if it did, I just didn’t get it. Which is quite possible.) The story felt more like the first chapter of a novel than a stand-alone story.

Next up is Christopher Harman’s "The Last to Be Found." I thoroughly enjoyed this one -- a ghost hunter invited to a possible haunted house for a nice dinner and recounting of a tale. It reminded me of a cross between a Sherlock Holmes story and "The Monkey's Paw" by W. W. Jacobs. Very good storytelling and description, and while the supporting characters might have been a bit stereotypical, it only made them more familiar and comfortable as part of the story. This one starts off slow and steady and builds to a strong, exciting finish.

The last story in this issue is "Thrown" by Don Tumasonis. It is a tale of a husband and wife exploring a Mediterranean island, a ritual they partake in every year. The story is very well-written, flowing along consistently on more than one level at a time. Mr. Tumasonis uses strong description, and has a good handle on symbolism, both of which contribute to making this story an enjoyable read.

New Genre is definitely a magazine I would recommend. I’m glad for the chance to review it, because otherwise I probably would have missed out on this one. The editors do not seemed constrained by genre boundaries -- based on the current issue, they merely take into account a story’s quality. I can’t complain about that.

(Originally published on the Whispers of Wickedness website, September 2007)

tsuri-dōrō – a small journal of haiku and senryū

The internet has brought forth many things, both good and bad. One of the good things is the prevalence of quality online haiku publications. Everyone has a different opinion about which online journals are best, but there are some -- The Heron's Nest, for example -- that just about everyone can agree on. One new journal that's been making quite a name for itself recently, and deserves to be a part of that conversation, is tsuri-dōrō.

straightness of the bean rows—
a simple nod
from my father

tsuri-dōrō is less than a year old. Editor Tony Pupello has put together five issues so far. Each issue leads off with a featured poet, ends with a haiga (with the exception of the first) and is accompanied by an essay.

The journal is laid out nicely, and each issue flows well from start to finish. The poems are broadly grouped into thematic sections with plenty of white space between each poem. Every one of the issues includes some truly great poems.

she vanishes
into another bad day
riptide

Mr. Pupello, while also an accomplished poet, is clearly a talented editor. tsuri-dōrō collects together memorable haiku on a wide variety of topics, and includes underrepresented perspectives alongside oft-covered subjects.

tsuri-dōrō is free, and definitely worth checking out. It will make you ponder, rethink your beliefs, and at times even laugh.

without syntax by Lee Gurga

without syntax is a short chapbook from a master of English language haiku, Lee Gurga. It's one of those collections where it's obvious to the reader that the poet enjoys the craft of writing.

taking my time the faded tattoo

The 18 poems collected between these covers vary widely in style and subject. There are one-line, vertical and visual haiku -- but no standard short-long-short three-liners. The chapbook is at times playful, whimsical and deadly serious. The poems flow easily from one to the next.

hard to say the soldier's eyes

without syntax was an Honorable Mention for the 2021 Touchstone Awards. The chapbook can be purchased from the Modern Haiku Press website for a measly $3 plus $1 shipping (within the United States). 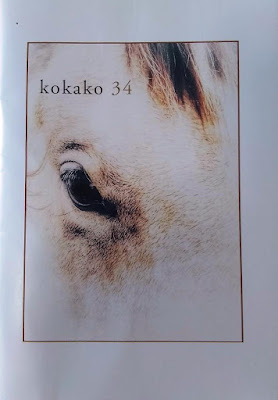 Haiku journals vary greatly in production, presentation and quality. I was pleased to discover a new journal, Kokako, that lands close to the top of all three categories.

Kokako is published out of New Zealand. Editors Patricia Prime and Margaret Beverland were kind enough to send a copy of issue #34 (April 2021). The journal is professionally printed, saddle-stitched, and includes almost 80 pages of haiku, tanka and related forms.

Like some other haiku journals, Kokako is not themed but the poems are sequenced in such a way as to lead the reader from one season or topic to the next. The poems flow easily, and the order doesn't feel forced or shoehorned.

Though the journal includes verses that evoke a rainbow of feelings, there seem to be a large number of nostalgic poems in this issue.

It's not all sadness and longing, though. Hopeful poems are included as well.

In addition to haiku there are many tanka, haibun and other longer poems. A couple of pages focus on moments taken from the pandemic and quarantine. Readers from outside the New Zealand/Australia region will enjoy the local-flavored poems featuring koalas, wallabies and penguins.

All in all, Kokako #34 is a pleasure to read. The issue includes many good poems and there are some well-known poets featured among the pages. I'm thankful to have a few of my poems included, and grateful for the opportunity to peruse this issue. Kokako doesn't appear to have its own website, but subscription and submission information can be found on the NZPS' Publications page.

This blog is a participant in the Amazon Associates affiliate program. As an Amazon Associate I earn from qualifying purchases. All prices are current as of their posting.